The start-up Running Tide wants to use kelp buoys to fight climate change. The plan might not work, but it’s still a preview of our climate future.

Last month, somewhere off the coast of Maine, a small group of researchers and engineers released a series of tiny, floating objects into the water. The team called them “buoys,” but they looked more like a packet of uncooked ramen noodles glued to a green party streamer than anything of the navigational or weather-observing variety. These odd jellyfish had one role in life: to go away and never be seen again. With any luck, their successors would soon be released into the open ocean, where they would float away, absorb a small amount of carbon from the atmosphere, then sink to the bottom of the seafloor, where their residue would remain for thousands of years.

That is not only the goal. That is also the business model. The team worked for Running Tide, a Portland, Maine–based start-up that claims it can remove carbon dioxide from the ocean and atmosphere through the magic of kelp. Running Tide is one of a series of carbon-removal companies that have burst onto the market over the past few years with the hope of whisking heat-trapping pollution out of the atmosphere and locking it away for centuries. The most famous companies, such as Switzerland’s Climeworks or Canada’s Carbon Engineering, perform direct air capture, using common industrial processes to chemically clean carbon from the air. But this is not the only approach: Some firms have tried to store carbon in stone or concrete; others have tried to accelerate the rock-weathering process that normally takes thousands of years…(more)

An initiative proposed by local group Menlo Balance seeks to make rezoning single-family neighborhoods in Menlo Park require a vote at the ballot box, but critics say that it’s trying to fend off a threat that doesn’t exist.

Menlo Balance was founded by residents Nicole Chessari and Tim Yaeger to pass an initiative restricting the redesignation of single-family residential zones in the city. The group gathered 3,000 signatures in just three weeks in order to qualify it to be on the ballot in Menlo Park this year…(more)

California communities, threatened by new state laws have turned to ballot initiatives and lawsuits this year in an effort to push back against the state legislation passed last year to remove single family zoning, overturning what many believe to be the state constitutional right of local communities cities to determine local zoning needs of their communities. The state is pushing for more density and less cars at a time when the state is reeling from blackouts, threatened water rationing for he current population. Voters are fast losing faith in the government. A lot of politicians are dropping out so this is the time for new talent to surface. The results of lawsuits and ballot initiatives could be pivotal.

The need for the aggressive housing polities to meet the housing demand is being questioned on a number of levels:

Independent analysis by Gab Layton of the Embarcadero Institute, determined the that methodology used by the Department of Housing and Community Development (HCD) YIMBY, Sacramento politicians, and Governor Newsom had resulted in double counting.

California Alliance of Local Electeds (CALA), convinced Senators Portatino and Glazer among others in Sacramento to joined forces with pubic citizens questioning the RHNA numbers and their actions resulted in an audit by Michel S. Tilden, the Acting State Controller

The Controller found major problems with the RHNA process that were widely reported by the press. These reports are being used as evidence in the cases that are being filed agains the anti single family housing bills.

The real test will come when the authors of the bills next run for office.

On May 25, 2022, the League of California Cities (“League”) and California State Association of Counties (“CSAC”) filed a 10-page letter with the California Supreme Court requesting it to depublish the First District Court of Appeal’s recent decision in Save the Hill Group v. City of Livermore, Case No. A161573 (my April 4, 2022 post on which can be found here).

The depublication request letter argues that the First District’s opinion improperly conflates CEQA rules governing an EIR’s “no project” alternative’s assumptions and analysis with those governing an agency’s findings that alternatives are infeasible, and also implicitly incorrectly concludes that an agency can’t reject the no project alternative for failure to meet project objectives. The League/CSAC letter, which can be found here, further argues that the opinion: will cause agencies to prematurely reject alternatives in the DEIR and improperly “pre-commit” to projects in violation of Save Tara; fails to apply the substantial evidence standard (to what the Court analyzed as an informational sufficiency challenge); and “ignores the realities of modern housing law” in suggesting the City could amend its residential zoning to accommodate open space preservation.

The League/CSAC request evinces a worry on the part of public agencies statewide that the Court of Appeal’s decision will make the already overly complex CEQA review process even more so and create “a potential new tree of CEQA case law” untethered to past precedents. (It also seems to reflect a welcome acknowledgment by these organizations representing cities and counties of the substantial legal constraints on agency discretion to down-zone and deny housing projects imposed under State housing production laws, such as the Housing Crisis Act and Housing Accountability Act, that are continuously being strengthened by the Legislature.)…(more)

As the megadrought bakes California, leaving parched lake beds and aggressive water restrictions in its wake, the state’s creeks and wetlands are more fragile, and vital, than ever. Punishments handed down to landowners who damage that delicate environment are now matching that seriousness.

A Bay Area winery executive is facing a multi-million dollar state fine for allegedly removing trees and destroying a small wetland on a rural patch of land east of Cloverdale in Sonoma County.

Hugh Reimers and Krasilsa Pacific Farms could be on the hook for up to $3.75 million in fines for allegedly cutting down trees, grading, ripping and other activities near tributaries to Little Sulphur Creek, Big Sulphur Creek and Crocker Creek in the Russian River watershed, according to the state water board…(more)

After nearly five years of service and push back, Northern Valley Harm Reduction Coalition is finally wrapping up the process of becoming a 501(c)(3) nonprofit charity…

The NVHRC team anticipates becoming an official 501(c)(3) in the coming months. All the paperwork has been submitted, and they are currently waiting to hear back from the IRS. The charity’s website states that becoming a 501(c)(3) “takes time and money.” Their journey to becoming a charity took longer than normal due to the setbacks of COVID and a lawsuit…

Regardless of how we feel about litter, it appears that the state legislature does not feel it is a CEQA matter. AB 1344 rules out CEQA claims against Harm Reduction programs in California.

In a bid to get representation in Washington that would be acutely attuned to these challenges, Sims and other local activists pushed the California Citizens Redistricting Commission last year to draw a new congressional district enveloping the region — a move that would concentrate the voting power of these diverse communities into one seat.

The commission agreed, and the state’s new congressional map, approved in December, grouped cities, including Vallejo, Fairfield, Richmond, Pittsburg and part of Antioch — many of which have been located in separate districts — into the new 8th Congressional District — the most racially and ethnically diverse district both in the Bay Area and statewide… 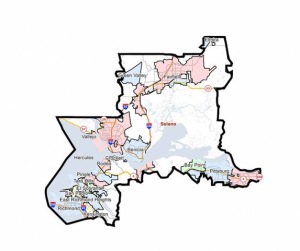 But a shining example of the redistricting commission’s ability to uplift community input has been followed by a textbook case of political machinations. The day the commission approved the new 8th District, John Garamendi, a 77-year old white congressman who lives in the Sacramento County town of Walnut Grove, outside the district, announced he would run for the seat…(more)

Solar-powered appliances are one step closer to becoming a staple and a part of our lives thanks to a “radical” new scientific breakthrough.

In 2017, scientists at a Swedish university created an energy system that makes it possible to capture and store solar energy for up to 18 years, releasing it as heat when needed.

Now in 2022, by connecting the energy system to a thermoelectric generator, researchers have succeeded in producing electricity.

Though still in its early stages, the concept developed at Chalmers University of Technology in Gothenberg could pave the way for self-charging electronics that use stored solar energy on demand.

“This is a radically new way of generating electricity from solar energy. It means that we can use solar energy to produce electricity regardless of weather, time of day, season, or geographical location,” explains research leader Kasper Moth-Poulsen, Professor at the Department of Chemistry and Chemical Engineering at Chalmers…(more)